Welcome to my www.wafuku.co.uk WordPress blog

I notice that Florence Welch, of Florence and the Machine, wears a furisode kimono in her Dog Days video. What really puzzles me is that she wears it with the fronts the wrong way round; she has the right front over the left one, whereas kimonos are worn left over right. Even if she didn’t know the left over right rule, it is very obvious with her kimono, as you can see from the third picture of her below, because the left side of the front has the deep, fancy pattern on it and the right front has only the smaller, simpler, bottom end of the design, so she has the nicest, most striking part of the front pattern hidden under the right side’s front. It would also look so much nicer with a sash that was about 3 inches deep and firm enough not to gather up, like a wide belt or something, worn with the buckle at the back. 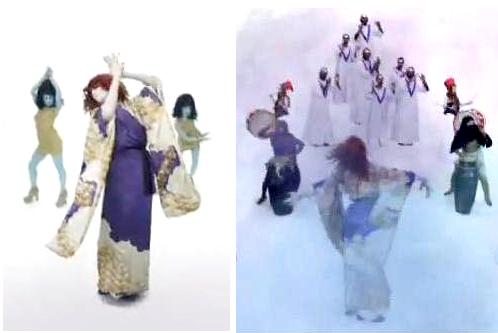 Florence Welch of Florence and the Machine

Here in the West, women wear their clothing fronts right over left and men wear them left over right but in Japan both genders wear their traditional clothing with the left front over the right. Well, that is unless they are dead, because, in Japan, only a corpse wears the kimono fronts right over left. It is not just people from outside Japan who get it wrong; nowadays most Japanese people do not wear wafuku (traditional Japanese clothing), so they don’t tend to know the rules involved in wearing it. It is not altogether unusual for a Japanese person who is wearing a kimono for the first time, perhaps a yukata one at a summer festival, to wear the fronts the wrong way round and it is also not unusual for an older, more informed Japanese person to rush over to them and try to switch their kimono fronts around, horrified that the young kimono novice is dressed as a corpse. Yukata kimonos usually have an all-over repeat pattern, so the pattern doesn’t make it obvious that the left front should be on top.

With a tomesode, houmongi, tsukesage or furisode style kimono it is usually obvious which front should be on the outside, because the pattern on the left front will be much more decorative but on a kimono with an all-over repeat pattern, such as a komon style kimono and most yukata kimonos, it is not obvious, which is why kimono novices get it wrong, especially if they are used to western world style women’s clothes being worn the opposite way. However, on the kimono Florence Welch is wearing in her video, it is very obvious which front should be on the outside but she still got it wrong. 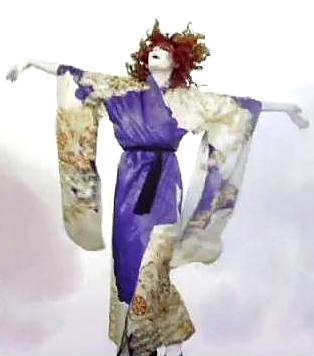 My daughter, who thinks she knows nothing about kimonos, has clearly picked up a fair amount of kimono knowledge from me over the years, mostly while modelling kimonos for me, because it was her who saw the video, spotted Florence was wearing a kimono and noticed, to her chagrin, that she had the fronts the wrong way round.

In saying that, way, way back when my daughter bought her first Japanese kimono, the one that made me want one and started me collecting, we didn’t know the left over right rule either and it was not obvious because that kimono had an all-over repeat pattern, so we do have photos of her wearing that first kimono with the fronts the wrong way round. Had it been one like Florence’s, though, I’m sure we would have realised which front went outside simply by looking at the pattern, so we can’t work out why Florence didn’t realise it.

Everybody Loves A Kimono

It seems everyone loves a Japanese kimono. Below you can see a photo of Dita Von Teese dressed up as a maiko (apprentice geisha). It’s a pity she is not wearing okobo geta, like those shown further down this page. When Dita Von Teese visits Japan she always gets a new set of photos taken of herself in a kimono. It takes them about an hour to get her dressed up, in preparagtion for the photos. Dita advises that every woman visiting Japan should do this too.  If you are not likely to be in Japan, you can always treat yourself to a genuine, Japanese kimono from my www.wafuku.co.uk website. Below Dita you can see Sarah Jessica Parker, in Sex In The City, wearing a floral kimono to a party, Kate Winslet in Mildred Pierce, Vanessa Williams, playing Wilhelmina Slater in Ugly Betty, Drea de Matteo in Desperate Housewives, wearing a pretty orange kimono, which I think is actually a girl’s one, rather than a woman’s one, and she has the fronts, like Florence, the wrong way round with the right one over the left instead of left over right. Janet Jackson,  Madonna, Jessica Alba, Reese Witherspoon and a few others and, of course, my daughter in the kimono that started my obsession with them. Since kimonos, when worn the traditional way, are worn with a big fold-over at the waist and, with children’s, big tucks at the shoulders, the children’s ones are actually quite big when the tucks are taken out and the waist isn’t folded up, so they can have a nice fit on an adult, as you see on Billie Piper. 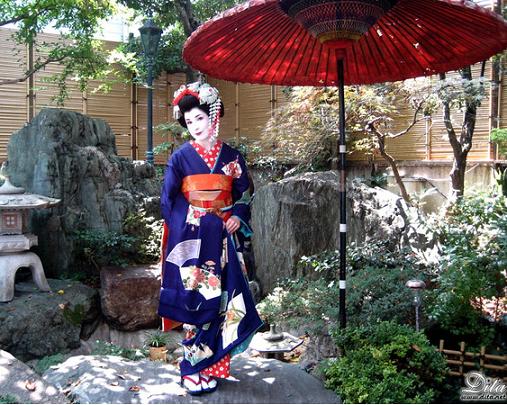 Sarah Jessica Parker in Sex In The City

Rita Ora Models a Wafuku kimono.
The May 2014 edition of Elle Magazine (UK) features the singer, Rita Ora, whom you can see modelling one of the silk kimonos from my www.wafuku.co.uk website.

Rita Ora in a kimono from www.wafuku.co.uk kimono 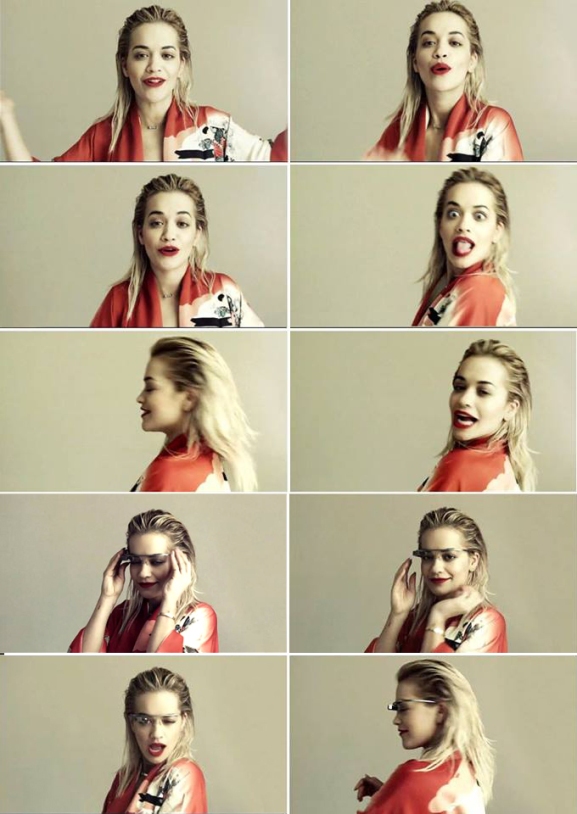 Above, on Rita Ora.

The same kimono (not on Rita). 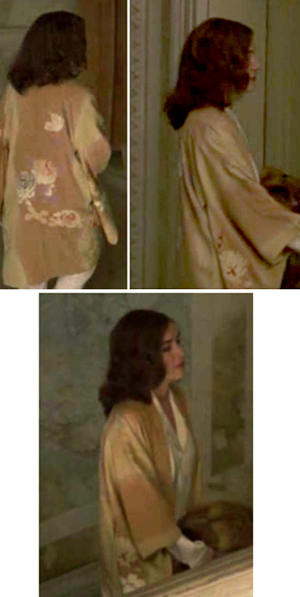 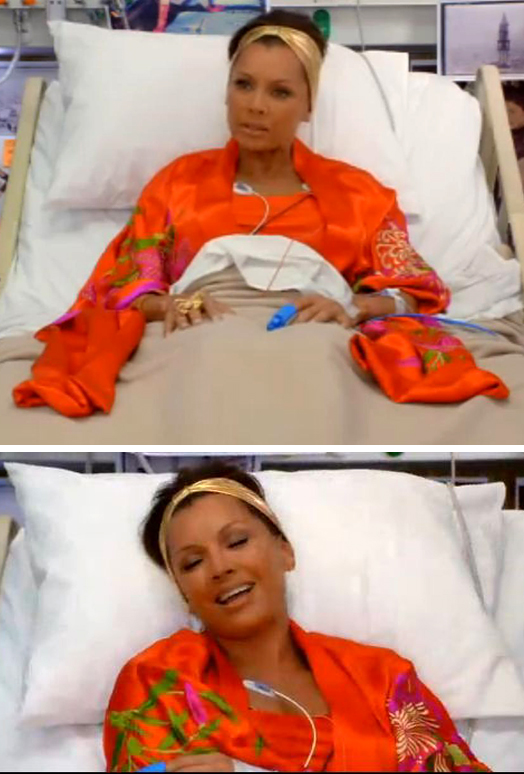 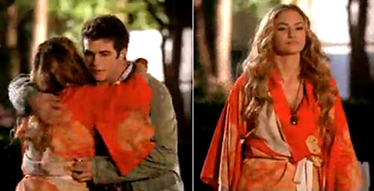 she too has the fronts the wrong way round

in what is actually a little girl’s kimono

Molly Ringwald in Pretty in Pink,

wearing a pink, antique kimono, with another kimono hanging on her door in the film

Hope Davis in The Matador

even she has the fronts the wrong way round 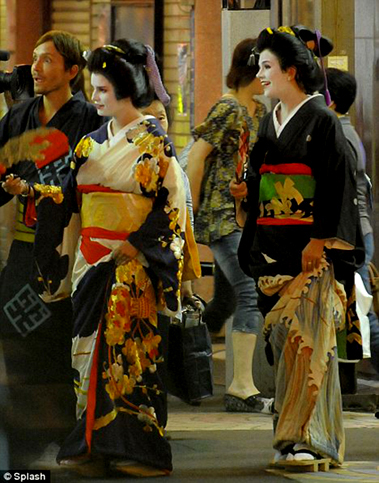 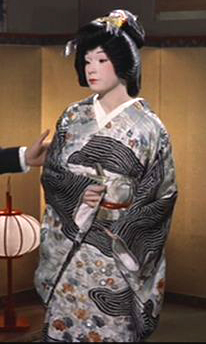 Jessica Alba as Sue Storm of the Fantastic 4

in a white kimono, as the bride at a Shinto style, Japanese wedding

wearing an antique Japanese kimono over her dress

Also from the tv series Firefly

The heavily pregnant character in this episode is wearing a red, Japanese michiyuki. Michiyukis often have covered buttons down the front but they actually fasten with press studs. This girl has hers only fastened at the top, with the front pulled slightly open because she has the large, pregnant bump that they want to emphasise in these scenes. They don’t normally lie open when worn. 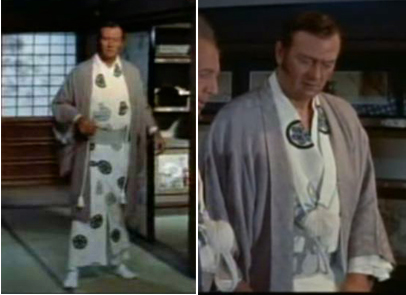 in The Barbarian & the Geisha 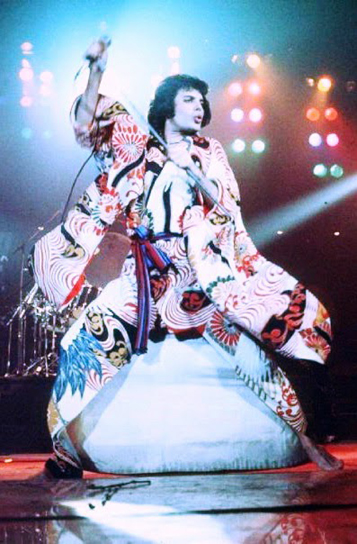 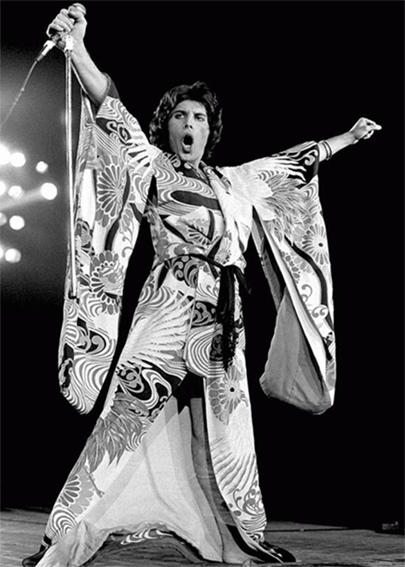 from the band, Queen.

wearing what is actually a women’s kimono.

The chainlink pattern on their happi is one of the komochi-Yoshiwara patterns, this one being “Yoshiwara-tsunagi” a single link wide chain. There was a guide to entertainment at Yoshiwara, at Tebiki-Chaya, at the entrance to the Yoshiwara.
Komochi-Yoshiwara was used as the pattern on the noren of “Tebioki chaya”, the guide teahouse. At the time, Yoshiwara wass representative of stylish play for rich men. The chain represented the hold such pleasure had in keeping them in Yoshiwara and the suffering of the women bound to stay there. It has remained a popular motif on happi and summer yukatas. 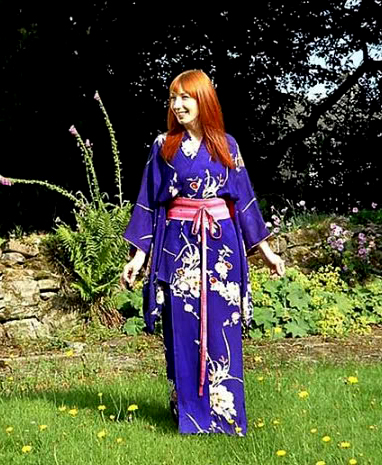 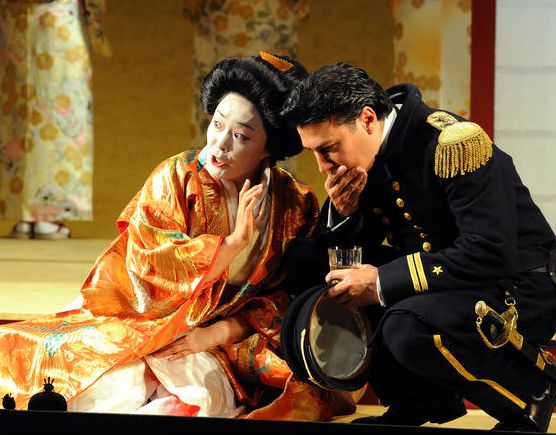 Too Small is Iki

I was talking to someone recently about Japanese geta and zori. The facts that they are rather narrow, that the toe post is in the middle and not offset to one side like western world flip flops and that they all tend to be quite small in length and don’t seem to vary an awful lot in size were mentioned. The narrow soles and the fact that the toe post is central means one side of the foot overhangs the side of the sole. The Japanese also allow their feet to overhang the back of the sole, with both geta and zori, they don’t consider that to look too small, they consider it iki (quietly stylish) but to the western world eye it looks slightly odd. We in the West expect the entire foot to sit within the edges of the shoe’s sole and not to overhang it at the sides and back. Below you can see a diagram of how they should be worn and why they are worn that way.

How the Japanese wear geta

In the photo below, you can see an example of what I mean. 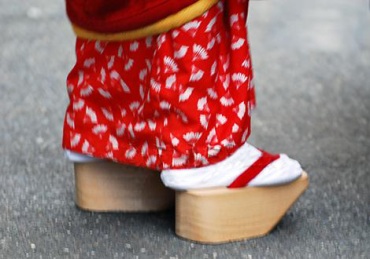 It shows the foot of a maiko (apprentice geisha) in her high geta, called okobo, with the side of her foot up by the toes hanging slightly over the side and the heel hanging over the back. If the foot does not overhang the back of the sole, that is also considered fine but you can see that an overhang is considered acceptable with traditional Japanese footwear. The person I was talking to about this wanted a pair of my zori for a photo shoot but thought they were no use because all were a little too short in length for the model but, on learning that the Japanese often wear them with heels overhanging, selected a pair for the photo shoot after all.