Welcome to my www.wafuku.co.uk Wordpress blog 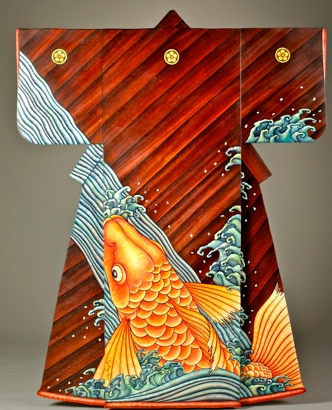 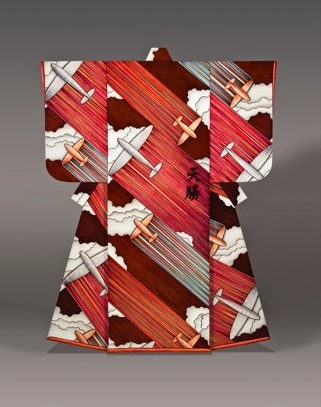 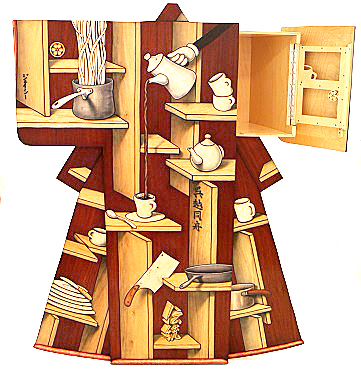 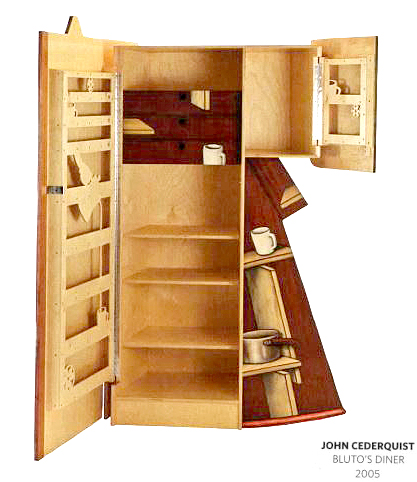 Downton Abbey fans may have noticed that Lady Mary, in the UK television series, Downton Abbey, wears a lovely kimono as a robe. Whenever a show portrays the 1900s to 1930s, you tend to see a kimono being worn if a scene is called for with a woman wearing a robe.

I’m afraid my screenshots are rather fuzzy but they are the best I could capture. 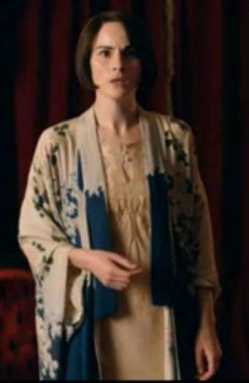 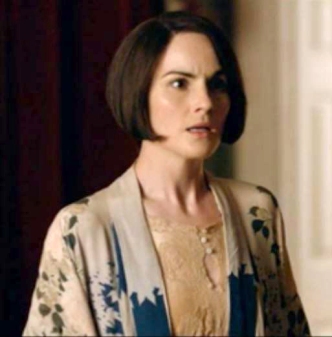 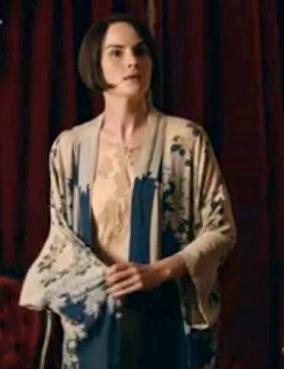 Another UK television show, Mapp & Lucia, based on the novels by E. F. Benson, has Lucia wearing a lovely kimono (see below). My screen grabs of it are even worse than the Downton Abbey one, as the scene with Lucia wearing it was in a room with low light, but you can see clearly enough that it is a little black beauty of a kimono. It is a lovely, old furisode kimono. Furisode are the ones with the ultra deep sleeves, a style worn in Japan by young, unmarried women on special occasions, such as to their graduation or to a wedding. Lucia’s is a lovely example of one from that era; it will have been very expensive, both when new and now. 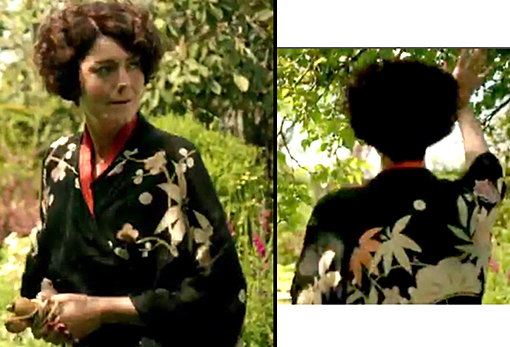 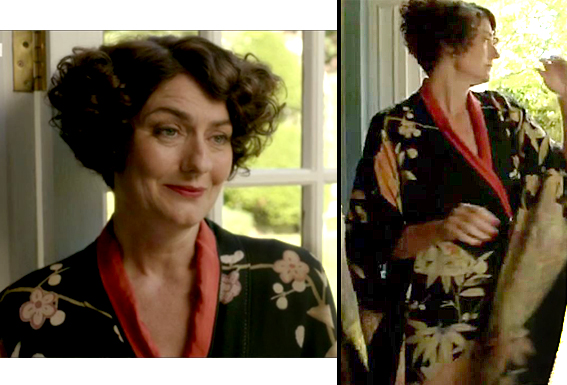 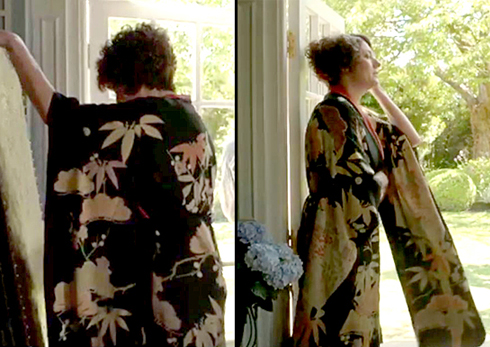 Shimada Mage is a Japanese Festival held in Shimada city around 19 September each year. It celebrates the topknot (chignon) hairstyle.

There are different theories about the origins of the Shimada Mage hair style: some say it was created by prostitutes working in the Shimada-juku inn district on the old Tokaido route to Edo, some suggest that it is the style used by the Kabuki actor Shimada Mankichi (1624-1643), others think that is the Japanese word Shimeta, in the sense of tied-up hair, became “Shimada” and others think that Tora Gozen, a native of Shimada, devised the style herself. Tora Gozen was a prostitute said to have been on good terms with Soga Juro Sukenari, the elder of the two brothers in the famous tale of Soga.
She is also depicted in Kabuki theater as Oiso no Tora, a key character in works such as Kotobuki no Taimen. In front of the Yakushiji Hall, in the grounds of Uda-ji temple in the Noda district of Shimada City, is a stone memorial known locally as “the grave of Tora Gozen”.

I wish I knew what the writing on their kimonos says. 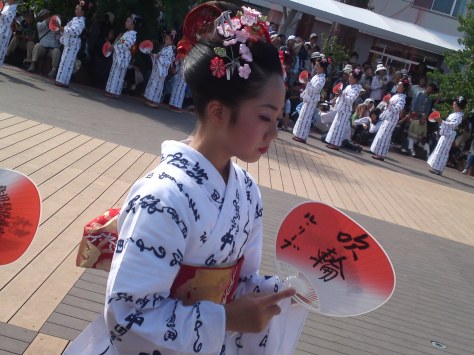 Above photo from Shizuoka Gourmet

Traditional Japanese Wigs. A lovely, Japanese lady, whom I know on G+, attended a Japanese wig event, where she watched wigs being styled by a professional. In Japan, brides who wear traditional, Japanese wedding kimonos wear wigs to complete the look. Here are pictures of wigs created by the artisan at that event.

Wax is combed through the hair, then it is tied and twisted into ornate designs.

There are many variations of the style. 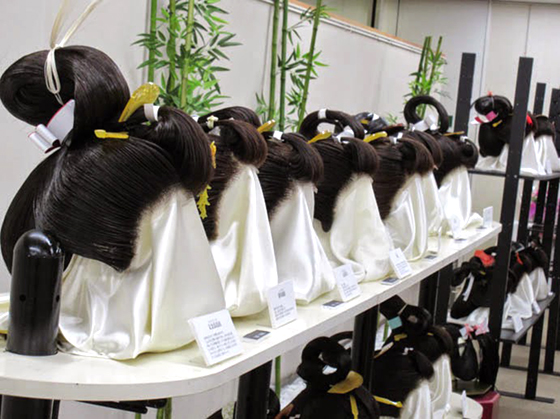 Wigs are also worn by geisha (geisha are also called geiko in some areas). The trainee geisha, called maiko, who have very ornate hairstyles lavishly decorated with flowers and pins, don’t wear wigs but have their own hair styled and therefore have to sleep with their necks resting on uncomfortable little blocks, called takamakura (high pillow), so that their hair touches nothing as they sleep. When they paint their faces white, they leave a centimetre or so of skin pink and unpainted around the hairline. The two reasons are that it keeps the makeup and facial wax out of their hair and it reminds people looking at them that there is a real person hiding behind the doll like mask of makeup. Once the maiko graduates into a fully fledged geisha, she cuts her long hair and has wigs made instead. A geisha therefore wears her makeup over her entire face, under the edge of the wig, with no flesh colour showing around the edge, apart from the eri-ashi, which is the unpainted pattern of peaks or curves at the back of the neck. She usually has a widow’s peak at the front. A geisha can also sleep more comfortably because she just takes off her wig and sleeps with her head on a standard pillow, with no neck block required to raise the hair from being disturbed. She no longer has to go through the weekly, agonizing ordeal of having her hair restyled, she just gets her wigs regularly maintained instead.
Some geisha have a bald spot on the top of their scalps due to how tightly their own hair was pulled and tied when they had, as maiko, to keep their own hair styled. The constant tight pulling on the scalp gradually damages the follicles until, at that tightest spot on top, the hair ceases to grow. They tend to be rather proud and fond of this bald spot, as it marks their suffering for their art. Not all geisha have been maiko first, one has to be young to become a maiko, One might be a maiko for about 4 years but it depends when one starts. If older, the apprenticeship has to be shorter, if not young enough, one has to become a geisha without can become a geisha but not a maiko. Not surprisingly, it carries extra prestige for a geisha to have been a maiko first. 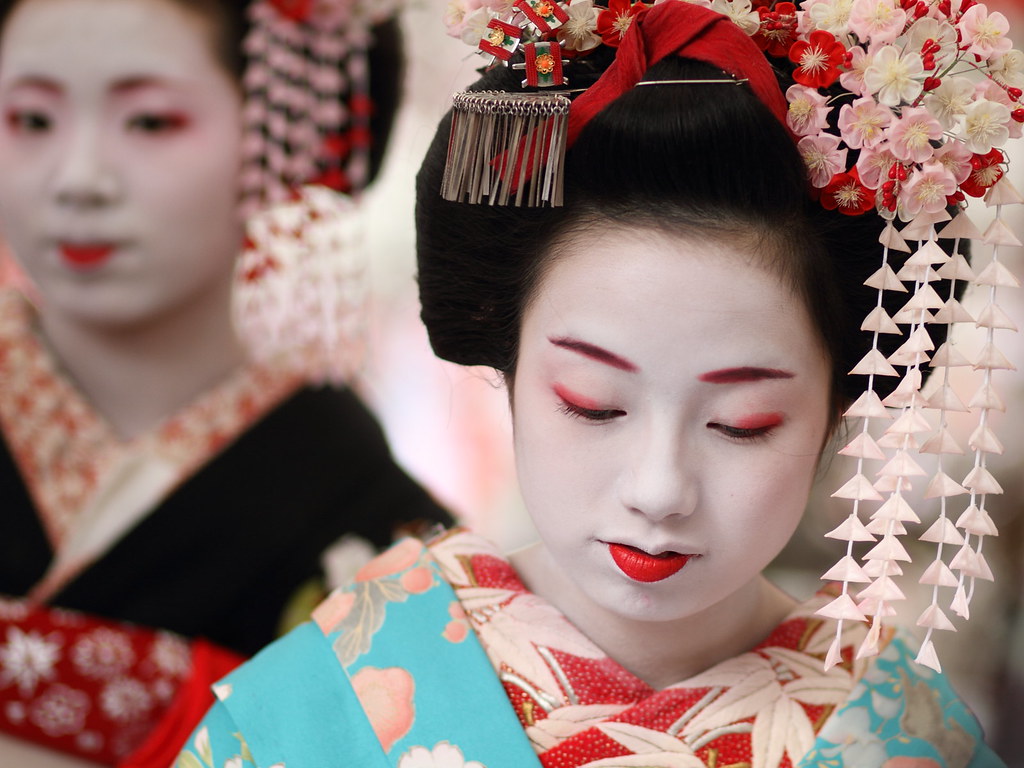 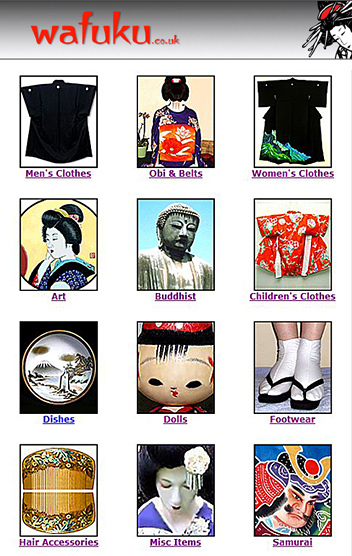 One of my kimonos being modelled by the singer Rita Ora

Please note that any advertisements shown below my posts are put there by WordPress, not by me. I am not responsible for whatever product or service is advertised and it being there does not mean that I endorse or recommend it.