Welcome to my Wordpress blog

get this blog’s RSS feed 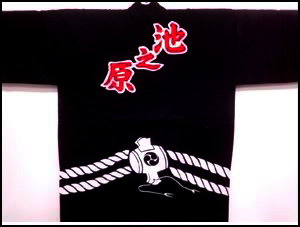 The lucky mallet is part of Japanese folklore and a popular motif in Japanese art, often seen on textile art and as charms and ornaments. I have hanten jackets (see one above) with lucky mallets on them, obis displaying them and at least one beautiful tomesode and a few boy’s kimonos displaying a takarabune (treasure ship) loaded with treasure, amongst which is the lucky mallet.

The lucky mallet is one of many treasures seen carried on a takarabune (treasure ship). This mallet had the ability to alter a person’s size and the one carried by one of the seven gods of luck can grant wishes. 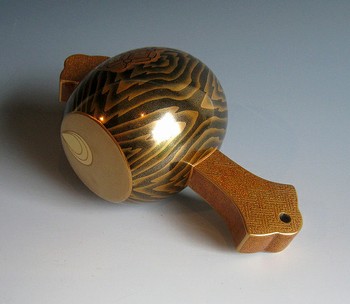 The tale is about Uchide-no-Kozuchi, a legendary Japanese hammer, andbthe name translates as “Small Magic Hammer” or “Miracle Mallet” and, in English, as “Lucky Mallet”. It is said that swinging the mallet grants its holder’s wishes. It plays an important role in the legend of Issun Boshi (One-Inch Boy), from the Otogizoushi, a tale written in the Muromachi Period, which tells a story of a tiny hero called Issun Boshi whose height is just one sun (slightly over an inch).

The story goes that the tiny Issun Boshi was in love with a princess who was the daughter of his employer, however, he was ridiculed for his diminutive size. He is given a job of accompanying the princess he loves on a trip. Along the way, they run foul of an Oni who has the mallet and swallows Issun Boshi whole.  Issun Boshi forces the Oni to spit him out by poking him on the inside with his tiny needle sword. The Oni spits him out but drops the Uchide no kozuchi in his haste to escape. As his reward, the Princess uses the mallet to grow Issun Boshi to full size.  At the end of the story, Issun Boshi and the princess are married.

Left picture – The princess, Issun Boshi and the Oni about to swallow him.
Right picture – Princess, with mallet, and enlarged Issun Boshi.

Shichi-fuku-jin – the Seven Gods of Luck

Shichi-fuku-jin are the Seven Gods of Luck in Japanese folklore. They are comical deities, often portrayed together sailing on a treasure ship (takarabune). They carry various magical items such as an invisible hat, rolls of brocade, an inexhaustible purse, a lucky rain hat, robes of feathers, keys to the divine treasure house and important books and scrolls. The one called Daikoku (also known as Daikokuten), the god of wealth and farmers, is depicted in legend and art as stout and sitting on two rice bags (often with rats nibbling at the bags, as a sign of prosperity) and he’s shown with a bag of precious things slung over his shoulder and a wish-granting mallet in his right hand. In the picture above, he is the one second from the right. 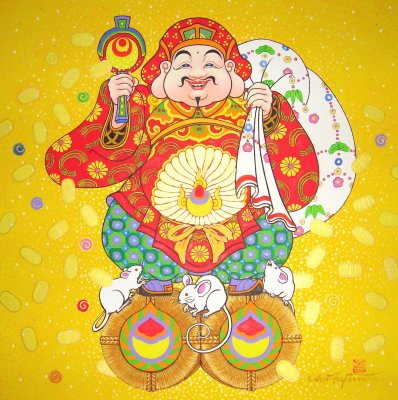 On a different note, I like a blog called Advanced Style, about stylish mature women. When younger, I had style; I was very into vintage clothing, especially 1940s and 1950s, and mixed it with contemporary, creating original and stylish outfits that got me noticed and made me different from the crowd. Nothing outrageous but I knew what I suited and I loved stylish clothes. In my mid forties I seemed to lose my confidence, worrying about dressing too young for my age and unsure of what suited me, especially as I’d changed shape a little and no longer felt young. I became increasingly cautious about my wardrobe, becoming more and more invisible. Although I do wear haoris, which do get noticed because they are beautiful and unusual, I otherwise do play very safe. The Advanced Style blog makes me want to capture a little more stylishness again and, I hope, as I get older, regain some confidence and cease to fear being too noticeable. The women in this blog, who seem to be a fair bit older than I am, are an incentive. I may not like all the clothes or looks they chose but I love that they make the effort and certainly have style. In the picture below, of two of the women on that blog, I love the simple, fitted black top and accessories of the woman on the left and the sunglasses of the woman on the right. I also like their hats but I have a small head, without the required high crown to sit hats on, so I can never get hats to fit me or sit correctly, so, although I love hats, I can’t indulge in wearing them but envy those who can.

This magnificent building is in Huainan, Anhui province, China. It is the Institution of Architectural Design of Hefei University of Technology and the designers are apparently the Huainan Fangkai Decoration Project Co. Ltd. You enter the building via the cello, which houses escalators.